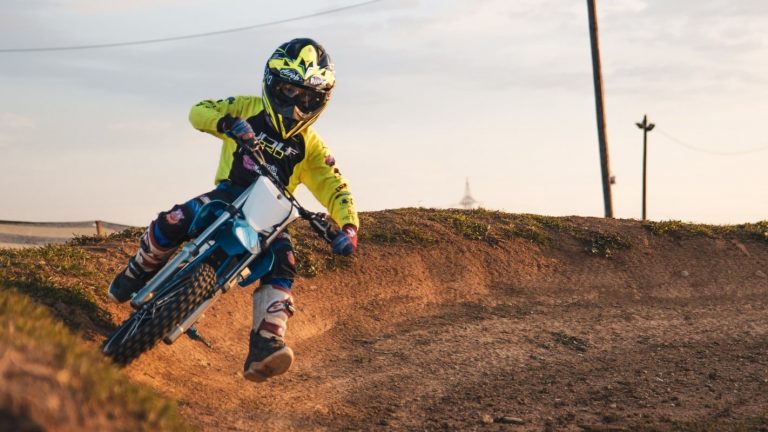 Because little tikes love motocross, trials, and supermoto, too.

The new line, called the KIDS 2, is designed for children ages 6 to 9 (or up to 88 pounds). It’s a logical next step from their original “KIDS 1” models which were intended for children between 3 and 6. Just like the Torrot KIDS 1, the KIDS 2 series is available in either a motocross, trials, or supermoto setup, which is as cool as it is cute.

Whether you’re an existing Torrot owner whose child is outgrowing their KIDS 1 or you’re new to the Torrot line completely, the new bikes deserve a second look for two reasons.

The first being that Torrot is now partially owned by the folks at KTM, so anything they make in the off-road segment gets some clout by default (more on that in the history below).

Second being the parent-friendly features that Torrot has baked into these modern electric fun bikes. While your kid is enjoying the hydraulic front suspension, DNM rear shock (preload adjustable!), and 25 mph top speed, you get to enjoy the parental controls from Torrot’s sleek smartphone app. Power output, top speed, throttle response, and regen braking are all wirelessly at your fingertips. That means if Timmy wants to go out and rip around at full power after dinner, he’s gonna have to wear his helmet AND finish his vegetables.

All three Torrot KIDS models carry a two year warranty, a 1500W motor, an 8.8Ah battery (that easily slides out from beneath the subframe for recharging), and a 54V charger that refuels the Kid 2 in about four hours.

Wait… So Who Is Torrot And How Is KTM Involved?

Torrot is a Spanish company founded way back in 1948 that made bicycles and motopeds. They had a good run, making two-wheeled products in one capacity or another right up until the 1980s when they were forced to shut down.

Fast forward to 2011, and the Torrot brand was relaunched with the help of some serious capital from angel investment companies looking to manufacture electric mopeds. Torrot had enough capital backing by 2015 to acquire fellow Spanish company Gas Gas, who had filed bankruptcy despite making some of the gnarliest trials and enduro race bikes money can buy.

That investment paid off in 2019 when KTM decided to buy a 60% stake in Black Toro Capital (who owns controlling shares in both brands) to grow their share of the European market and double down on their investment in electric two-wheelers (notice Husqvarna and Gas Gas both make eMTBs).

That purchase likely played a large part in Torrot’s decision to add a line of off-road focused electric products to their line, and lends the new Torrot KIDS some “race-ready” street cred to boot.

Ready to race your electric dirt bike? The Red Bull TKO is back again with the ECR eMoto Class and this year will be better than ever.

The most anticipated Surron is here. Watch ECR take the Surron Ultra Bee for a first ride in this video.

A Royal Enfield/Stark Future Collab Is Headed Our Way

A quick look and Q&A about the exciting new electric enduro bike from Rieju.

With the Bafang BBSDHD motor kit, this long wheelbase electric mountain bike is perfect for riders looking for a fast ebike that can handle any terrain.